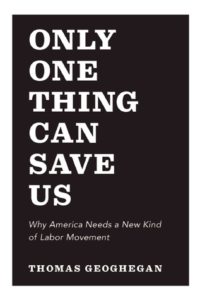 Only One Thing Can Save Us: Why America Needs a New Kind of Labor Movement by Thomas Geoghegan (2 of 2)

Carrying on from part 1 of my commentary about this book, he starts chapter 4 off with the Chicago Teachers Union (CTU) strike of 2012.  The author mentions that in his youth he was a “lawyer for the United Mine Workers” so he knew that strikes were risky but “it’s still hard to imagine a labor movement without them.”

I remember reading about the strike but was not aware of any details. I just assumed that they were getting screwed over somehow, because strikes are risky things! And for some reason, Republicans hate teachers, and especially hate tenured teachers. Whenever I hear someone bitch about the luxury lifestyle of “three months vacation” and “high pay” I know I am listening to a Republican.

The “vacation” thing might be envy. However, our country could change the whole premise of vacations with one new rule by the Department of Labor. However, obviously, in the world where Betsy DeVoss dictates the Republican wet dream of privatizing ALL education thus killing the common good of public school systems, that isn’t going to happen.

Many comparisons have been done of the vast differences between the U.S. labor laws about vacation time and those darn show off European countries’ national vacation policies. Michael Moore’s movie, What Country Should We Invade next, shows the glory of the lifestyle of people for whom the national motto is not #WorkOrDie.

Many workers here get zero paid vacation days. Heck many get zero paid sick days. The labor laws have so many loopholes in them (despite the many good things that people fought and died for) that we are all still essentially granted beneficence only if the employers want to offer anything. Many rely on the lack of employees’ knowledge en par with a labor lawyer to simply not comply with the minimal benefits for employees.

When #WageWorkOrDie is a belief held by EMPLOYEES themselves, even asking for a raise is risky business. You think I am wrong and that surely all employees would support a strike for more vacation, raises, or anything?

Guess again. Brainwashing and propaganda over generations have left us with people who hate anyone to get anything “for free” or more accurately on “their” tax dollars. Hey, they worked their whole lives and never took a day off! That’s what “good” people do! They “take pride in their work” and most stupidly, perverse pride in “never taking a sick day” for years.

So those of us who are gracious enough to stay home with our germs are considered slackers by the mythical “American Work Ethic.”

Can you even imagine someone strutting proudly around in France, boasting of their work ethic? Or the Italians? Or the Spanish who invented the concept of the Siesta?

We must stand together or be cut down apart. I am not sure, but I think it might be too late given the 2016 election and the sheer quantity of people who have expressed venomous rage at those undeserving people on unemployment, on family aid, and the really personal one for me: the shirkers on disability.

I admit it, when I hear these things, I wish that they or their loved ones would get multiple sclerosis. The problem is that they will STILL rail at the shirkers, only the script will change to, “They” are undeserving of assistance compared to me/my family who are “really” sick.

BACK TO THE CHICAGO STRIKE

There are many complicated factors that are part of union bargaining, including in this case “the right to recall.”

“The Board of Education [had] been laying off thousands of teachers — some of the very best in the system — and bringing in raw rookies off the street to fill positions that the laid-off teachers could fill.” (p. 46)

“Why would they get rid of the best teachers and bring in new hires off the street?

Money, of course, but it was also to break the CTU, or to make it clear to every teacher that she could be tossed out at any time.” (p. 46)

There has been speculation for years about how deliberate the Republicans effort to underfund, undermine, and basically eliminate public-funded education was but I think it is pretty obvious that an educated electorate cannot be controlled, silenced, or stopped from fighting back with the tools that education provides.

Well, some education. Not the education we get currently in too many public schools. No critical thinking is taught K-12 anywhere I am pretty sure. Heck, we have had two presidents who can’t even read: George W. Bush & The Donald.

The Republicans have taken over school boards because they knew it was important and the Democrats were naive at best, stupid more likely in not targeting local elections more as if we were (and are) in a civil war. This war is between the filthy rich and the wage slaves. The Democrats became Republicans back when Bill Clinton implemented harsher policies than any Republican could have gotten away with at the time. Neoliberal is really a misnomer because there is nothing liberal about the current Democratic Party, which turned its back on labor decades ago.

POLITICAL STRIKES
The whole point of both sides hating teachers seems to be money. I would argue deep seated misogyny as well, because it is the female dominated public schools that come under attack. Just like back in the day it was always Mom’s fault if a child misbehaved, whether she was a stay-at-home mom (hovering) or a wage worker (latch-key kids), failures of the school system were the personal responsibility of teachers who had little or no control over anything about doing their job and under what kind of conditions.

The strike he discussed for the Chicago Teachers’ Union “really arose from a feeling that the mayor and his billionaire liberal friends wanted to fire teachers en masse and privatize the public schools.”

“We loved the strike because it was giving the finger to Rahm Emanuel, Obama, the whole managerial culture they represent: Bill Gates, Jaime Dimon, Penny Pritzker, Bain Capital, Teach for America, and the whole bunch.” (p. 46)

Wow, reading further along about the malfeasance of politicians with their determination to break the union, the passed laws that denied any strike to be about anything but wages. Teachers, like nurses, are burdened by unreasonable class/case loads. Bargaining for reduced class loads  and other aspects of the workplace became an “illegal subject of bargaining. . . .” thanks to a deliberate law implemented to make it illegal. One law pushed through by a lobbyist to a billionaire changed the vote to strike law from a simple majority to “an absolute 75 percent of all teachers in the schools, whether card-carrying members of the CTU or not, whether or not they had cast a vote.”  (p. 52)

I remember this strike now. The author remarks that Mayor Emanuel mocked the teachers for demanding air conditioning in the classrooms. At the time of this mockery, it was a September day in the 70s. Proving his ignorance with this remark he was oblivious to the fact that some kids attended school year round and so spent time in classrooms when the temperature reaches the 90s.

Bottom line, the Democrats need to be targeted for political strikes because they have abandoned the progressive values that gave us the public school system in the first place.

He makes a solid case for disruption of the Democrats to get them back supporting organized labor. He chides the leadership for focusing so exclusively on “taxing the rich” but the rich to the poor redistribution (contrasted with today’s wage worker productivity taken by the rich) of wealth will not be possible “until we first redistribute power.” (p. 65)

Sorry for the abrupt ending. I had to return the book to the library and will simply have to buy it since it is so good. Poor health has made it harder for me to write all my thoughts and quotes from the good bits of the book Buy it, get it from the library, whatever, just be sure to read it.

Either this book or Economism (or both) made the reference to the power of the nurses and their union. I believe the phrase was “The nurses will save us all!”

The endorsed MN DFL candidate for governor was a nurse! Vote for DFLer Erin Murphy for governor of Minnesota with the superb pick of Erin Maye Quad for Lieutenant Governor.