Just found this older list that I planned to do short takes on, but now have returned the books and don’t recall much so have to recheck out, but here is the list for your consideration. Some duplicates with other posts may occur if I did manage to do some write ups but I am too lazy too check each one.

For some reason, the links to a lot of the books are gone. I may have missed one or two, but I KNOW I DID NOT MISS all the ones now missing GoodReads links, darn it. So I’m sorry, but I am not going to spend another hour or more redoing them when I don’t know why they disappeared in the first place.

Turning Texas Blue: What it will take to Break the GOP Grip on America’s Reddest State by Mary Beth Rogers

Illustrated Great Decisions of the Supreme Court by Tony Mauro (2000)

The woman who ran for president: the many lives of Victoria Woodhull Lois Beachy Underhill, Gloria Steinem (Translator)(1995)

That’s not what we meant to do: reform and its unintended consequences in twentieth-century America by Steven M. Gillon (2000)

Blasphemy: how the religious right is hijacking our declaration of independence by Alan Dershowitz (2007)

Better, stronger, faster: the myth of American decline — and the rise of a new economy by Daniel Gross (2012)

Dollarocracy: how the money-and-media election complex is destroying America by John Nichols

God’s Politics: why the Right gets it wrong and the Left doesn’t get it by Jim Wallis

Takeover: the return of the imperial presidency and the subversion of American democracy by Charlie Savage (2007)

The Supreme Court on unions: why labor law is failing American workers by Julius G. Getman
(checked out via ILL)

The Age of Acquiescence: the life and death of American resistance to organized wealth and power by Steve Fraser

The Fight to Vote by Michael Waldman

The Pact: Bill Clinton, Newt Gingrich, and the rivalry that defined a generation (2008)

The Servant Economy: where America’s elite is sending the  middle class by Geoffrey P. Faux (2012)

What’s the matter with White People: why we long for a golden age that never was by Joan Walsh (2012)

A Disability History of the United States by Kim E. Nielsen (2012)

Bending Toward Justice: The Voting Rights Act and the transformation of American democracy by Gary May (2013)

Give us the ballot: the modern struggle for voting rights in America by Ari Berman ( 2015)

[no image] The Democratic Party: Opposing Views by Noah Berlatsky

[no image] The United States Constitution: Questions and Answers by John R. Vile

The Best Government Money Can Buy? by Francis Megahy (2010)

The Party is Over: how Republicans went crazy, Democrats became useless, and the middle class got shafted by Mike Lofgren (2012)

The New Prophets of Capital:  A deft and caustic takedown of the new prophets of profit, from Bill Gates to Oprah by Nicole Ashcroft (2015) [checked out via ILL]

Because of sex: one law, ten cases, and fifty years that Changed American Women’s Lives at Work by Gillian Thomas (lawyer)

Betting on famine: why the world still goes hungry by Jean Ziegler

Profit over People: neoliberalism and global order by Noam Chomsky (1999)

Rat F**ked: the true story behind the secret plan to steal America’s democracy by David Daley

[no image] The End of Poverty? Think Again by Beth Portello (2010) – heartbreaking

The People’s Pension: the struggle to defend Social Security since Reagan by Eric Laursen (2012)

Capitalism and freedom by Milton Friedman (2002) [author I am happy to say died in 2006; he created the false doctrine of neoliberalism]

Nation on the Take: how big money corrupts our democracy and what we can do about it by Wendell Potter (2016)

The New Road to Serfdom: a letter of warning to America [listened to book on cd] by Daniel Hannan (2011)

The Road to Serfdom: text and documents by Friedrich A. von Hayek (2007)

Why we can’t afford the rich by R. Andrew Sayer

The Hockey Stick and the Climate Wars: dispatches from the front lines by Michael E. Mann (2012)

F*U*B*A*R: America’s right wing nightmare [cd] by Sam Seder (2006) for the innocents out there, FUBAR stands for Fucked Up Beyond All Recognition, and variation of SNAFU, Situation Normal, All Fucked Up

Unthinking: the surprising forces behind what we buy [cd] by Harry Beckwith (2011)

All the Single Ladies: Unmarried Women and the rise of an independent nation by Rebecca Traister (2016)

People Get Ready: the fight against a jobless economy and a citizenless democracy by Robert Waterman McChesney

FICTION The Peripheral by William Gibson

Theft of a Nation [checked out via ILL] 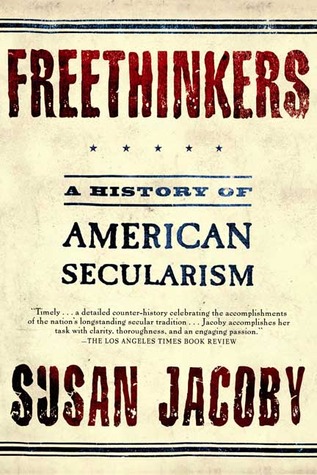 The Age of American Unreason by Susan Jacoby, (2008 Large Type has a different cover image). Cover also says it was a New York Times Bestseller.

Well written and argued. Many people I know are mystified at the seriously problem of willful ignorance that has developed in this country. I thought W. had personified ignorance with his sanctimonious smirk and refusal to read newspapers because he didn’t want to be influenced by thinkers other than his staff who absolutely would not tell him anything he did not want to hear. And I had forgotten the case of decorum by the real president, Dick Cheney, who shouted at Senator Patrick Leahy to  “Go fuck yourself!” on the Senate floor.  (p. 40, 44) This provides the great contrast between the Founding Fathers, and especially the insults penned by Shakespeare. She cites an example of a better insult from the 1890s,

. . . Speaker of the House Thomas Reed took care of one opponent by observing that with ‘with a few more brains he could be  a halfwit.’ Of another politician Reed remarked, ‘He never opens his mouth without subtracting from the sum of human intelligence.’ Americans once heard (or rather read) such genuinely witty remarks and tried to emulate that wit. Today we parrot the witless and halfwitted [sic] language used by politicians and radio shock jocks alike.” (p. 41)

Alas we have slumped even further into the abyss with Trump, Cruz, Walker, et al on the Republican side. And the anointed corporate puppet pick, Hillary, of the Bankruptcy Act treason of the people, and the Iraq war of the military industrial complex. She who cannot claim any bill or legislation passed that helped women or people of color.

END_OF_DOCUMENT_TOKEN_TO_BE_REPLACED

The Great Escape: Health, Wealth, and the Origins of Inequality by Angus Deaton (2013)

This is a good book. Highly recommended to read. Full of details that are really informative but results in a lot of numbers and statistics. The following tidbits are in random order rather than sequentially by chapters.

I have been puzzled a lot by how poverty is established because when I do the math, to pay for all the basics (rent, food, utilities, phone, Internet, medical insurance, drug insurance, co-pays and deductibles) it exceeds poverty by a lot. I don’t even remotely understand how any one can manage just the cost of tampons and diapers alone, much less clothing, especially for growing kids — the mind boggles. Prior to this section there was an informative but this part was a bit tedious on the GDP and how it is calculated. Informative true, but also depressing because he described how inadequate and somewhat spurious our economic system is based on the GDP.

END_OF_DOCUMENT_TOKEN_TO_BE_REPLACED

I don’t remember now how I learned about The Core of the Sun, but I am so glad I did, and so glad my public librarians are astute and consistently have almost every book I want to read. Johanna Sinisalo is Finnish, so that is unusual to have the opportunity to read books by Finnish authors. But, WOW, this book is so original and odd and the dystopia envisioned is akin to what all the critics are saying when they compare it to The Handmaid’s Tale, one of my favorite books ever.

On Goodreads, after reading some of the reviews, I wrote:

Michael’s description was well done, but did include an error: it is Vanna, the morlock lead character who becomes addicted to chilies. Manna is the sister she is looking for. And it must have been important to the author to also head the chapters with Vanna/Vera because it represents how they even took her original name away from her, just because they could or as a deliberate psychological ploy. The comment is made a bit later about not allowing women to have r in their names, but it was not explored or explained further, beyond her later meeting a morlock woman with an r in her name. But she just leaves it there, without attributing any significance to it. So I was kind of waiting for that to be a foreshadowing of a twist of some sort, or some further exploration on gendered names, but none was developed. It is a slim book, and probably would be too digressive from the narrative if she didn’t have a consistent basis for it in her world-building.