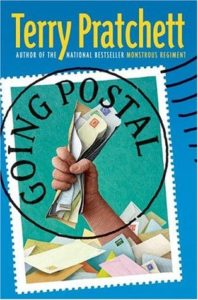 Going Postal by Terry Pratchett [RIP, you are very missed]

Alas, I do not remember which of his books I read first. But Going Postal is my favorite among all the books I have ever read. Last year I had learned that the Brits made a video of it and was able to get from the library and it was respectable job, but to my recollection, did not capture what Pratchett’s writing manages like no other I have read: half the content of the book is not WHAT HE WRITES but what he DOESN’T WRITE. I have tried to put my finger on this for years without success. Until now. Now that I LISTENED to the book on CD read by a masterful narrator. He captures more than the words; he captures the meaning behind the words that is often different from what the words as written are actually on the page.

HE IS MY FAVORITE AUTHOR AND NOW I UNDERSTAND WHY! He makes me snort and laugh and giggle and have wry smiles and nod appreciatively and gasp in amazement when something so minor, so thrown away chapters ago becomes significant and masterfully portrays the cleverness of a particular character, or their steely determination, or their ability to read between the lines themselves.

In art it would be called negative and positive space. A good painting or photograph illustrates some subject, flowers or whatever, but the background — negative space — is incidental, or meant to disappear, hopefully in harmony and balance and not disjointed from the main subject. A great image integrates the negative and positive space so that the parts NOT THE SUBJECT are EQUALLY IMPORTANT TO THE COMPOSITION. For example, the space between the curve of a woman’s arm and her waist that forms a diamond that is repeated by the position of a space between her dress and the wall. The negative space defines the positive space as much if not more than the other way around.

Ordinary, even very good authors are excellent at positive space. Putting the words on the page, putting the best word on the page is even better, and using techniques like ending chapters on cliff hangers and switching scenes in the next so you have to go on to learn what happens. Even better authors gently and subtly put little hints of things to come, or more often state their intentions baldly, “If only I had known then. . . ”

Terry Pratchett’s writing is more like a weaving than a flat page in a book or a photograph.

As an example of ordinary writing, consider mystery stories. They start out with x, toss in a murder, throw in some red herrings and obstacles, and proceed to resolution, usually with the protagonist’s life being threatened, or loved ones, because the drama is presumed to be in the threat level. You can flip to the end and see if you guessed the antagonist correctly and decide if the journey is worth making or not. Too often lately, I have decided not, and turned to non-fiction. Even when I know how those books end (e.g. history), the pleasure is in the details of how we got there, with very frequent completely unexpected twists, and most shockingly to me, things happened in plain sight during my lifetime when I thought I was paying attention but it turns out I was clueless.

Terry Pratchett makes you enjoy every sentence, every word as if each were a treat to savor and listen to or read over again and again and still laugh anew (or feel sorrow, or rage, or satisfaction) every time in Going Postal in particular. Not a false note, nor too many, and every word serves a purpose.

END_OF_DOCUMENT_TOKEN_TO_BE_REPLACED

Austerity: The History of a Dangerous Idea by Mark Blyth (2013)

I could start and end my commentary with this simple imperative: BUY THIS BOOK.

Economics was one subject about which I had little interest and a lot of hostility when forced to take it in college. The teacher tried his best, but trying to explain economic theory to a bunch of kids who have possibly never had any knowledge of how much money their parents make, spend, or what things cost is a rather hopeless proposition. At least for me, combined with minimal exposure to life long enough to seen the actual consequences of economic theory in policymaking and being able to see the short-term and long-term impact of such policies, made the content just too much of a word salad to be useful.

END_OF_DOCUMENT_TOKEN_TO_BE_REPLACED

Zombie Politics and Culture in the Age of Casino Capitalism by Henry A. Giroux (2011)

Though the whole zombie bit grows old, this slim volume expresses my views on the current state of affairs only now we are worse off post 2016 election. This is a MUST READ BOOK!

I wrote about another of his books that was amazing too, The Violence of Organized Forgetting.

The author writes for Truth-out so his thoughts subsequent to this book are also available online at www.truth-out.org here are a few links I picked up on a Google search for “henry giroux” 2016 election:

Anti-politics and the Plague of Disorientation: Welcome to the Age of Donald Trump
This one begins with a great quote:

“Ignorance, allied with power, is the most ferocious enemy justice can have.”
— James Baldwin

The Authoritarian Politics of Resentment in Trump’s America (November 13, 2016) Here’s the opening paragraph to it (LOVE his use of language!):

In the face of a putrid and poisonous election cycle that ended with Trump’s presidential victory, liberals and conservatives are quick to argue that Americans have fallen prey to a culture of incivility.

END_OF_DOCUMENT_TOKEN_TO_BE_REPLACED

F*U*B*A*R: America’s Right-Wing Nightmare by Sam Seder and Stephen Sherrill (2006)
and, in the appendix, “a ringing denunciation by Janeane Garofalo.”

For those of you not familiar FUBAR stands for Fucked Up Beyond All Recognition.

I first “read” this on cd and it was so funny I had to get a hard copy (aka book) o be able to share my delight at the dark humor “exposing the truth about the Right’s blueprint for total domination — over your money, your mind, your sex life, and even your place in the afterlife. . . .” (book jacket copy)

This book was published in 2006 so bear that in mind. It was before the Obama Hope and Change propaganda of neoliberalism screwed Americans all over again as per Bill Clinton’s presidency. Although maybe not as bad, but he didn’t fix things Bill Clinton broke (NAFTA destroyed the middle class) — or Hillary either (Bankruptcy Abuse Prevention and Consumer Protection Act 2005 perfect Orwellian NewSpeak title since corporations are protected and consumers are abused). He will absolutely exceed even Republican dreams of total corporate control if he succeeds in getting the TPP passed. Fortunately, since Obama is for it, Mitch (the face of careless disregard for citizens) McConnell is against it.

END_OF_DOCUMENT_TOKEN_TO_BE_REPLACED

Down for the Count: dirty elections and the rotten history of democracy in America by Andrew Gumbel (2005, 2016)

This is a MUST READ BOOK. Our democracy has been chugging along despite dirty rotten scoundrels, but that is no longer the case. McCarthyism is when I think tipped us over the edge. No, wait, the internment of the Japanese Americans came first. Previously we had been stumbling at least towards some degree of a sense of social justice. But that was killed by Reagan, compounded by Bill Clinton, and destroyed world over by George W. Bush.

Another on the must check out from library again and do a proper review. Listening to a college course lecturer on McCarthyism now on cd so that will be very informative as a background to the future and potential civil liberty crack downs like the Alien and Sedition Act.