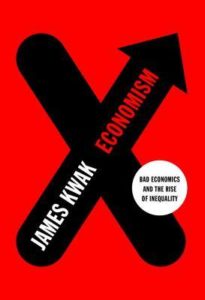 his is a continuation of a really long post posted recently. I have to take the book back to the library but can’t resist sharing some more of the book before tomorrow.

Chapter 4 is titled “You get what you deserve” and encapsulates various justifications for inequality.

He starts with some stats on property and the fact that minimum wage is “below the poverty line for a family of two, let alone a family of four.” It would seem obvious, with companies making massive profits — or even small net profits — that the owner class could afford to pay more than minimum wage. Because like Chris Rock said, the fact that we have to have a minimum wage law at all means employers wouldn’t pay you at all if they could. And by gosh, they are coming after every labor law that ever was passed including or maybe especially minimum wage.

Through the “science” of economism, however, conservatives can “prove” that increasing wages will not reduce poverty, but will increase unemployment. The argument starts out flawed because employees have NO POWER TO SET WAGES unless they are in a union. Even then, employees must be willing to go on strike and try to cost an exploitive employer so much in lost profit that they will agree to pay fair wages. Being on strike requires back up funds, courage, and risk. People who were the original strikers risked their lives and were killed by POLICE for daring to demand living wages. That’s how bad American employers don’t want to pay wages: they would rather kill people that make a nickel less for themselves.