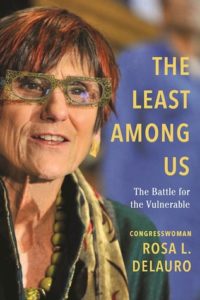 The Least Among Us: Waging the Battle for the Vulnerable by Congresswoman Rosa L. DeLauro (2017)

This congresswoman really impressed me when I was watching some of the C-SPAN coverage of her passionate commentary in favor of progressive values and in support of social justice. I had hoped for better, gripping, passionate writing in her book but was disappointed.

It reads more like a memoir that I expected. I thought it was going to cover substantial policy discussions “in the weeds” as has become the commonly used gag-reflexing golf analogy. The presumably editorial direction to have chapters arranged by mostly repetitive use of “In Defense of” is tiresome at best.

Chapters like “In defense of children, of women, of the hungry, and so on, are presented recounting some of the legislative action and negotiating at the time, such as in 2008. Well, that was nearly a decade ago and I am not sure anything relevant can be pulled out of journal notes or other contemporaneous documents. I think her voice and her passion is important to hear. Perhaps she will write another, organized around policy issues, using her details of what actually happened in service of the bigger picture.