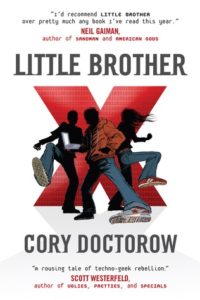 Little Brother by Cory Doctorow (2008) surveillance run amok and not in a good way. Obvious references to George Orwell’s 1984 creation of Big Brother and the constant surveillance state abound. The protagonist even uses Winston (W1n5t0n) as a handle, the name of Orwell’s protagonist.

Good read. In fact, I decided it warranted a straight through read because it was that kind of plot. Chain events leading ever onward. The 2008 contrasted with reality of 2017 (being unbelievably surreal today) dates the plot a bit because it relies on a belief in the legitimacy and independence of the Fourth Estate, A Free Press.

The concept of Fake News comes through perfectly with the way the clever teens find themselves being misunderstood and portrayed as terrorists instead of freedom fighters in the general news.

One of my major theme reads has long been surveillance. Because I can imagine the panopticon of life with RFID tags and 100% tracking all the time all too easily, I would resist and die most assuredly if it came to that in reality.

That is my problem with fiction any more. Like when you are confronted with a big opponent, you don’t throw away your gun, you shoot them and run. In this case, the bad guys know all about the protagonist yet they just don’t disappear him. Or threaten parents, or any of the numerous other things the truly unleashed evil of totalitarianism and authoritarianism would actually do.

The tech is fun, and accurate from my recollections back in the day. But one still must suspend disbelief to get past the general impracticalities of the travel in the Bay area described without a Bay Bridge or BART between San Francisco to Berkeley. The sheer time it takes to travel at the best of times makes going to see girl friends by bus and NOT coming under some surveillance was difficult to overlook since I have lived in the Bay area.

I have similar problems with TV shows in NY and other places I live when poof, 10 minutes later protagonists have gotten in their police cars and gotten to a site before bad guys get away. Plus they love to go from daylight to night time between commercials.

The classroom scene where the social studies teacher taught the students about the Free Speech movement was great. I think the non-boomers may not fully appreciate what a change the dissent of the times was considering how politics has deteriorated, the environment has been trashed, and racism and religious zealotry plus serious hate crimes are everywhere today.

It is bizarro world out there for me considering the Sixties represent such an idealistic time to me. We believed we could change the world, and we did. We just didn’t expect so many people to want to return to the world where the KKK marched proudly on the streets — now without even being shamed into covering their faces. We didn’t expect the hard won right of reproductive rights to become eroded to meaningless and forced birth. We didn’t expect that our elected representatives could and would be so greedy and awful and corrupt and evil that they would sell us all out for a few million dollars and a lifetime of power and luxury along with their cronies.

We surely didn’t expect the Jesus Freaks to turn into the least Xtian people on the earth and work to control every aspect of our lives for the golden calf.

And they are watching us. Everywhere all the time and reading everything and spreading fear and suspicion and it is only going to get worse. This book makes an interesting contrast with the Dave Eggers book, The Circle, where people willingly (mostly) voluntarily give up privacy. I believe it will not be a choice.