Horsemen of the Trumpacoplypse: A field guide to the most dangerous people in America by John Nichols (2017)

Dangerous people are controlling and embellishing the wickedness of authoritarian zealots in the United States alternate reality government of 2017 and onward so far in 2018.

I best post this soon, while I have been writing this the people in the administration are leaving the White House by the dozens. The Horsemen mentioned include women and men, outsiders as well as political operatives.

As Rachel Maddow (MSNBC) has documented, any list of people who are in the current administration has a short shelf life. From Part 3 The Hacks, Reince Priebus (The Hacks #18) and Sean Spicer (The Hacks #19) are two names I recognized immediately as already gone.

The contents are divided into four parts:

I am going to take the lazy way for now and just provide screen shots of the table of contents to show the names named for your Googling pleasure or sorrow.

Some of the ones I find most despicable — oh, nope — I can’t limit myself on this after all since some may be really despicable but just unknown to me as yet. So I will just say Elaine Chao, Secretary of Transportation (Privateers # 29), was formerly also a player under W. But the most notable thing about her, sad to say, is that it seems pretty obvious that she got her high paying and high positions because of her husband, Mitch McConnell, Senate Majority Leader  (The Hacks #21). Alas I will not speak of the things I think about the two but hope that the almost certain corruption represented by this obscene union is revealed soon. I can’t imagine how it has remained suppressed until now.

Random names that caught my eyes scanning the table of contents include the Privateer #32 Betsy DeVos who, as Secretary of Education, plans to destroy public schools and use taxpayer money to cover private/religious/homeschooling “choices” for education instead.

Maybe the man who vows to destroy net neutrality and destroy concerted dissent and collaborative resistance, Ajit Pai, the Federal Communications Commission Chairman (Privateer #39) should be ranked very high because of the long term consequences of the damage he can due without repercussions.

Associate Supreme Court Justice cheater Neil Gorsuch (The Hacks #26) will destroy justice as we know it and claim the Constitution is on the side of the conservatives and religious zealots no matter what rights they infringe on that come before the Court. He obviously ranks up there in the scum of the earth category on many levels, but the damage he does and will do will be top headlines and dissected and become the stuff of judicial travesties in history.

The ones I am most worried about are the ones we had never or rarely heard of, people like Wicked Messengers #1, Robert and his second (of 3) daughter,  Rebekah Mercer. The Wikipedia links don’t even have photos of them, so they clearly have someone paying media attention.

Probably themselves since the Mercer family runs the now somewhat infamous Cambridge Analytica. They may be seriously malicious conservatives, but they are smart. I wish that they would do good instead of evil with all their money. The data analysis capacity of this business could really be a significant force for good.

One entry in the various astounding political financing included a $25 million donation to Trump, plus all kinds of Super Pac and other donations. Surely there are better things to spend $25 million on than campaigns supporting politicians like Ted Cruz before Trump? Though I suppose that helps employ graphic designers, video producers, and more.

The introduction to The Trumpocalypse begins with a wonderful quote from one of the best administrations in the history of the United States: Franklin Delano Roosevelt in 1935.

“Malice domestic” from time to time will come to you in the shape of those who would raise false issues, pervert facts, preach the gospel of hate, and minimize the importance of public action to secure human rights or spiritual ideals. There are those today who would sow these seeds, but your answer to them is in the possession of the plain facts of condition.

The author explains that “malice domestic” is from Shakespeare (of course). ” He “warned of those who might initially cloak their evil intentions in order to obtain authority over great nations. They might get away with it initially, but the damned spot is never washed away.”

“As the wisdom tradition of the proverb writers assures us: “Their malice may be canceled by deception, but heir wickedness will be exposed in the assembly.””

The author goes on to note that such an assembly has been built by Trump: “an administration of greedheads and grifters, climate-change deniers, and fake-news presenters, white nationalists and religious zealots, full-on neocons and blank-stare ideologues.“

Here are the screenshots from the Table of Contents: 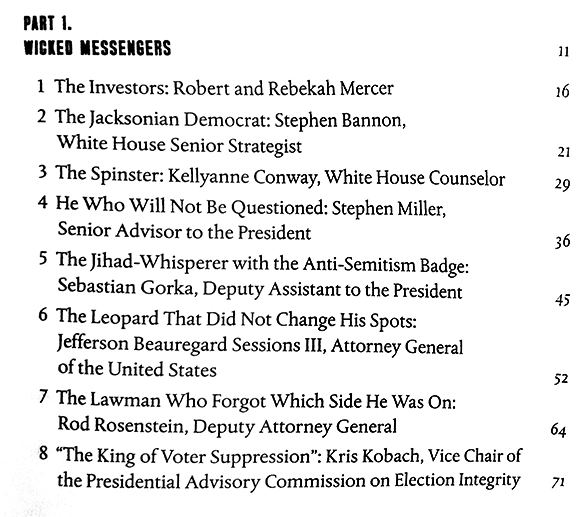 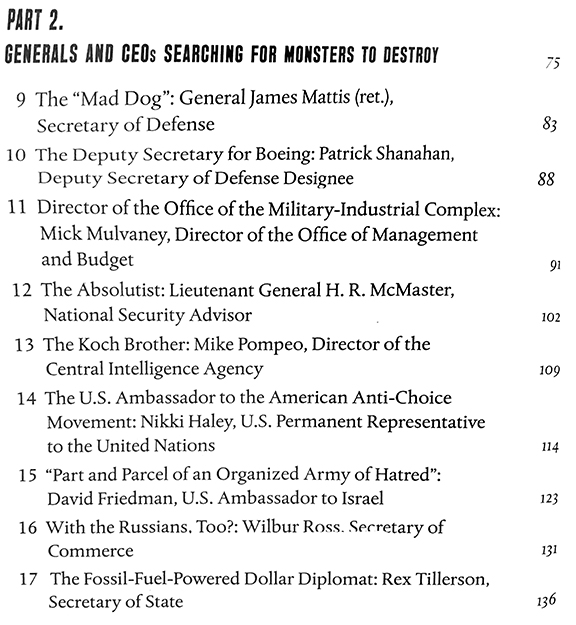 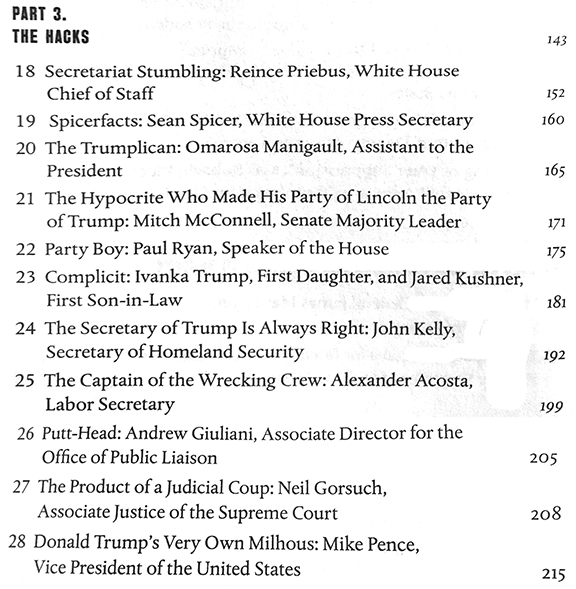 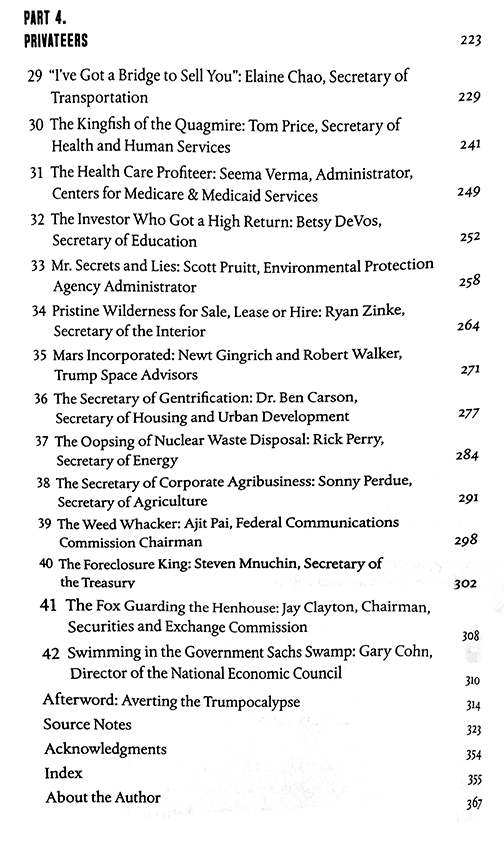